Today we’re going to touch on one of my favorite topics, which is science fiction. As technology evolves, it is becoming more science than fiction, and we are almost there. The opportunity to profit from exploring space is as real as ever. Virgin Galactic (NYSE:SPCE) is a major commercial space travel company trading publicly. But trading SPCE stock requires a helmet, a space suit and a barf bag. The action is violent and you will get dizzy.

In spite of my enthusiasm, my conclusion today is that I will wait for better entries lower. Shorting SPCE is also wrong. I’ve been very consistent in my coverage of the stock in the past. I was bullish when it was smart to be so, and bearish on extended runs. My bearishness is always against the price action and not company prospects.

I have no doubt that we will be traveling in space on a commercial basis. There are other companies competing and two are very high profile.

The leaders of Tesla (NASDAQ:TSLA) and Amazon (NASDAQ:AMZN) are already fighting it out. SpaceX and Blue Origin are spending billions to get there. My gut says that they will beat Virgin to the punch, but that doesn’t mean that it will fail. This is literally going where no one has gone before. There’s likely enough room for everybody to profit.

Buying SPCE stock as it rallied into $60 was pure insanity. The phenomenon known as FOMO is very powerful. It keeps us alive in the wild because it’s good survival instinct. We instinctively want the chase because their safety in numbers. But in trading, it’s an extremely dangerous thing to do. There is also the added effects of Reddit blitz rallies.

Using charts and common sense should have stopped people from buying it near tops of rallies over 150%. Conversely selling it under $15 is also wrong. This is the kind of stock investors should buy and hold for a long term. However, because of what’s going on on Reddit, the super-spikes force investors to trade around their thesis. I don’t blame them, I would do the same.

My success with SPCE stock has been by selling puts below. I wrote about this in December of last year and that trade played out like a charm. Now near $35 per share, this is not an obvious entry for me. I would like it much better at or below $25. This may upset a few fans of the stock, but remember they don’t trade in a vacuum. If the stock market corrects, it will drag all stocks down with it. 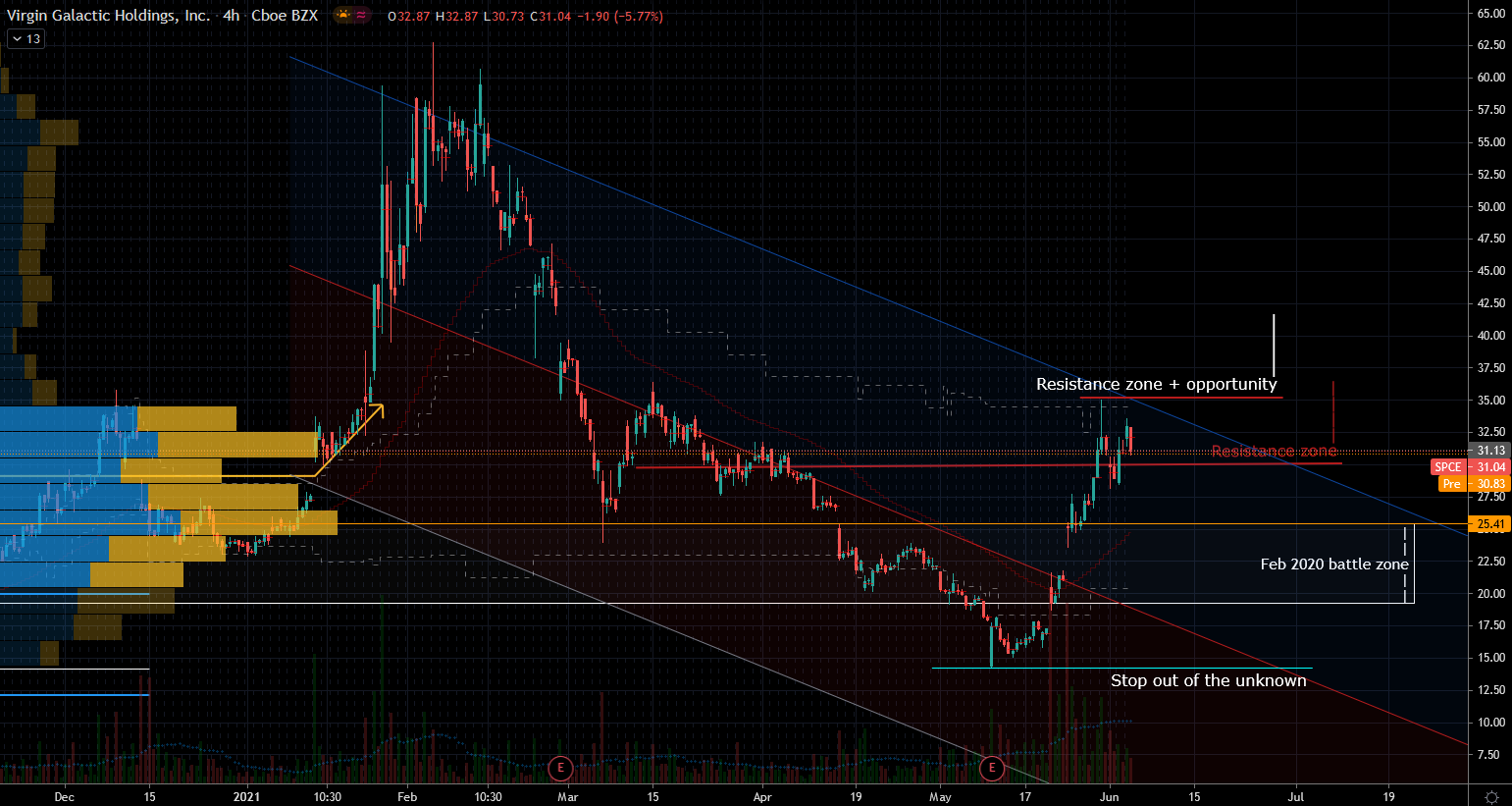 Regardless of the quality of the stock, great ones fall through no fault of their own. Investors who cannot fathom downside scenarios need to tone down the emotional aspect of their trading. The rally from $16 per share unfolded in an unnatural fashion.

The chart has holes all over the place, which makes for weak hands. Like it or not, machines are responsible for over 80% of all trading. They don’t like messy charts, so they tend to fill large gaps. Not every gap fills but one this big and this sharp most often do.

This company is almost pre-revenue, its financial metrics are not useful to us yet. Therefore, I would put more weight into the technicals to compensate. Otherwise the guessing aspect would overwhelm the thesis and make it frothy. My strategy for trading SPCE stock is to buy the dip into $25, or chase the breakout above $35. In this environment, momentum buyers could take it for another $10 from there.

I will leave you with this nagging fact. This year, Ark Invest is the hottest topic on Wall Street. They recently launched a space exploration ETF. I could not find SPCE among its holdings. I don’t typically follow the lead of experts blindly. But not having Virgin Galactic, which is the only space travel company available, is strange.

On the date of publication, Nicolas Chahine did not have (either directly or indirectly) any positions in the securities mentioned in this article. The opinions expressed in this article are those of the writer, subject to the InvestorPlace.com Publishing Guidelines.