The odds are that you probably didn’t know of Indonesia Energy Corporation (NYSE:INDO) until its stock blew the roof off the house with a meme-stock-esque price surge at the turn of the month. InvestorPlace icon, Louis Navellier, constructed an interesting argument for a further bull run. His central claim is that “It’s time to respect the explosive volume and price action of INDO stock.” 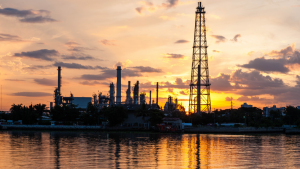 However, upon analyzing INDO stock, I had to remind myself of the “law of one price” (LOOP). The LOOP essentially says that inequalities are transitory and that an asset will revert to its equilibrium growth trajectory in the long run. In turn, this provides market participants with tradable opportunities. INDO may be a volatile small-cap stock that has brought wealth to many of its investors, but I think it is time to short the stock. Here’s why.

Indonesia Energy Corporation’s stock was one of the main breadwinners during the past month as it rose more than 400% amid sanctions against Russia.

Another reason why INDO’s stock price surged was because of the news that it mobilized a drilling rig at Kruh Block. The rig will drill two back-to-back production wells, which are part of a plan to complete the expansion of 18 new production wells by 2024. It is estimated that each newly mobilized well will add $2.6 million in annual revenue if an oil price of more than $95 per barrel is upheld.

Primary producer stocks tend to skyrocket whenever exploration ventures are successful, but there is no doubt that geopolitical affairs mainly assisted INDO’s stock price. As mentioned in the introduction, INDO is a small-cap energy producer whose price volatility is far greater than larger producers, subsequently causing it to be overly sensitive to notable systemic events.

I reckon the backdrop here could be pretty severe as the stock has been a momentum trade rather than a rational investment. We all saw what happened to those investors that bought the likes of GME (NYSE:GME) and AMC (NYSE:AMC) at their peaks. INDO’s market capitalization is approximately $214 million, which isn’t justified if one considers that we’re talking about a company that only produced $2 million in revenue during the past year.

Furthermore, Indonesia Energy Corporation likely won’t benefit from higher oil prices. Unlike some larger producers, it is still very much an enterprise in a set-up phase. To elaborate, established producers’ operating margins will benefit from higher oil prices; however, early-stage exploration firms won’t necessarily as their businesses aren’t running at the capacity required to cover their operating leverage.

The best way to justify an energy stock’s price is to look at its price-to-book value. This is because its assets are mostly tangible with known market values. INDO is trading at 20.32 times its book value, which is roughly 10.62x above the industry average, suggesting that we’re looking at a stock that could fall off a cliff soon.

To add to the skepticism, the stock is trading at 116.42 times its sales while Oil prices are at multi-year highs. I fully understand that INDO is, in essence, a growth stock, but I can’t see this company reach near-term sales figures that would justify its current price, even if it expands to its targeted 18 rigs.

The Bottom Line on INDO Stock

The bottom line here is simple: don’t get caught up in another fad.

Indonesian Energy Corporation may be progressing well as a firm, but its current stock price can’t be justified in any way, shape, or form. We’re looking at a company that is hardly producing $2 million in annual revenue with a business model that won’t allow it to scale its revenue by the required 116.42x to justify its current market price.

On the date of publication, Steve Booyens did not hold any position (either directly or indirectly) in the securities mentioned in this article. The opinions expressed in this article are those of the writer, subject to the InvestorPlace.com Publishing Guidelines.

Steve Booyens co-founded Pearl Gray Equity and Research in 2020 and has been responsible for equity research and PR ever since. Before founding the firm, Steve spent time working in various finance roles in London and South Africa, and his articles are published on various reputable web pages such as Seeking Alpha, Benzinga, Gurufocus, and Yahoo Finance. Steve’s content for InvestorPlace includes stock recommendations, with occasional articles on crowdfunding, cryptocurrency, and ESG.