7 Electric Car Stocks to Buy for a Big EV Boom

Biotech and pharmaceutical companies are seeing an unprecedented boom in 2020. The race for a novel coronavirus vaccine has lit a fuse under many stocks in that sector. Also seeing a boom this year are electric car stocks.

Mohammad Niamat Elahee, a professor in the Department of International Business at Quinnipiac University, writes:

“While electric vehicles are likely to increase their market shares significantly in the coming years, it will still take time for them to completely dislodge gasoline run cars. However, the pace of improvement in battery technology may make electric cars cheaper and its adoption faster than anticipated.”

“Roughly 90 percent of the personal vehicles on the road daily could be replaced by a low-cost electric vehicle available on the market today, even if the cars can only charge overnight, which would more than meet near-term U.S. climate targets for personal vehicle travel.”

With electric car companies in the spotlight, which are the electric car stocks to buy in order to take advantage of the EV boom? Here are seven picks:

Some of these are pure electric car plays, some provide key components for EVs and one is at a crossroads.

You can’t make any list of electric car stocks to buy without including Tesla. This is the company that has done more than any other to kickstart the EV sector boom.

TSLA stock is up almost 500% so far in 2020, and that rapid growth is boosting the entire industry.

After years of losses, Tesla is showing it can turn a profit. The company is churning out record numbers of vehicles and expanding into global markets with its Chinese Gigafactory now operational.

The problem for would-be investors? Seemingly setting new records every day, TSLA stock comes with a high valuation. And then there’s the question of how long it can keep up this blistering pace of growth.

Nikola was in the news frequently this spring after the announcement of the Badger. This is the company’s battery-powered pickup truck that will be taking on Tesla’s Cybertruck. The badger offers a twist in an optional hydrogen fuel-cell powertrain that would give it an incredible 600-mile driving range.

The Badger has the potential to turn Nikola into a big consumer EV player in pickup truck-hungry America. However, the company’s real long-term growth potential lies in its hydrogen fuel-cell electric semi trucks. The company is building a $600 million plant in Arizona to build the big rigs. NKLA stock got a boost in August on news it had landed a contract to deliver 2,500 electric garbage trucks.

2020 has proven to be a huge turnaround year for the Chinese EV maker. Deliveries of its luxury EVs not only picked up, they have hit record levels. It’s ramping up production for a new EV6 premium coupe SUV. Margins have been up, and losses are narrowing.

Nio isn’t necessarily out of the woods — it’s still at risk if China’s economy sputters because of a pandemic-induced global recession, or if trade tensions with the U.S. ramp up –but NIO stock is up 370% so far this year.

The potential for that performance to continue makes it one of the hottest electric car stocks to buy.

Cincinnati-based Workhorse isn’t part of the consumer EV rush. This company is focused on the less glamorous market for electric delivery vehicles.

Workhorse and its market don’t catch the public eye the way Tesla does, but its niche has the potential to be an extremely lucrative one. In 2018, United Parcel Service (NYSE:UPS) placed an order for 950 electric delivery vans from Workhorse. The savings for the delivery company is pegged at $170,000 per vehicle over 20 years, thanks to lower fuel and maintenance costs.

The UPS venture hasn’t yet turned into anything really big, but the mother lode could be around the corner for Workhorse. The company is one of three finalists bidding for a contract with the U.S. Postal Service. The USPS wants to replace its aging fleet of 180,000 delivery vans and the contract could be worth more than $6 billion.

In addition, Workhorse does have a toe in the consumer market through its 10% ownership stake in Lordstown Motors. That investment has potential to be very valuable if Lordstown’s Endurance electric pickup truck is a hit.

WKHS stock leapt in July and remains near record highs as anticipation builds. At this point it is up 495% so far in 2020. 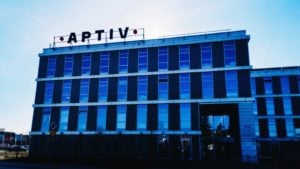 Aptiv doesn’t make electric cars. However, the company is a key supplier to the electric car industry. Its E-Mobility division offers a range of critical components including high-voltage electrical connectors and wires, charging cables, active cooling systems to monitor and dissipate heat generated by high-voltage charging, and electrical safety systems.

APTV stock was hit hard by the coronavirus market panic in March and hasn’t yet fully recovered. Shares are currently trading at the $86 level, down 9% from the start of the year.

If electric car sales match the market’s enthusiasm for EV makers, that’s going to ramp up demand for Aptiv’s E-Mobility products which should pay off for APTV stockholders.

The key to electric vehicles is their batteries. That makes Panasonic one of the best electric car stocks to buy. Panasonic is the No. 1 global supplier of Li-ion batteries used in hybrid, plug-in hybrid and fully electric cars.

Panasonic has joint ventures with both Tesla and Toyota (NYSE:TM) to manufacture batteries for their electric vehicles. In February, Panasonic reported the first quarterly profit from its Tesla battery business. As battery production volume ramps up, Panasonic is expecting material costs to decrease, helping to improve that profitability.

Like Aptiv, PCRFY stock was hard hit in March and while it is on the road to recovery, it’s still trading below January levels.

General Motors is one of the big three automaker — the U.S. car companies that are struggling for survival. It’s actually a misnomer to call GM a car company these days since its focus has become selling gas-guzzling pickup trucks and SUVs instead of cars.

An early EV pioneer, GM was vilified for killing its battery-powered EV1 which hit the market in 1996.

However, General Motors has made a comeback to the electric car market. The Chevy Bolt is a popular option among American EV buyers. Earlier this year the company unveiled its modular Ultium electric vehicle platform. Using unique, fast-charging battery packs with a driving range of 400 miles or more, GM has plans for 20 EVs using the Ultium platform.

Where things get interesting for investors is the potential for GM to spin off its EV business. In mid-August, a Deutsche Bank analyst suggested that GM is “actively evaluating” the option of spinning off a stake in its EV business. According to that analyst, such a move could see GM shares hit $93. The rumors have already pushed GM stock up in August. But even with shares currently trading at the $30 range, that prediction suggests huge upside for GM stock.

That makes it one of the electric car stocks to buy in this boom — even if General Motors is one of the traditional automakers that so many EV companies are hoping to leave in the dust.

On the date of publication, Brad Moon did not have (either directly or indirectly) any positions in the securities mentioned in this article.

Brad Moon has been writing for InvestorPlace.com since 2012. He also writes about stocks for Kiplinger and has been a senior contributor focusing on consumer technology for Forbes since 2015.