7 Internet Of Things Stocks To Buy For 2021 And Beyond

Internet of Things stocks continue to see strong growth when it comes to market size. But from my observation, neither investors nor consumers have grasped just how large this market will become.

Year by year, more and more devices are linking up. That’s creating a rich web of connected devices, meaning an explosion in data, and therefore a need for faster internet infrastructure.

As a result, there’s an entire realm of growing stocks that are benefiting from the Internet of Things (IoT). It’s also a group that will continue to benefit from growth for years to come, particularly as connectivity infrastructure builds out and 5G networks become mainstream.

Here are 7 Internet of Things stocks to watch going forward:

Data volume from IoT connections is forecast to climb from 13.6 zettabytes in 2019 — a zettabyte is equal to 1 trillion gigabytes — to 79.4 zettabytes in 2025. That’s a huge growth runway from here.

Some investors may find Roku as an unexpected pick to lead our list of Internet of Things stocks. After all, it’s more a streaming video platform than a pure-play IoT name. That said, its internet-connected devices stand to profit from this trend just the same.

While Roku does not generate much profit on the sale of its hardware, it does make a large amount of money through advertising revenue. The more Roku-powered smart TVs and Roku devices that are out there, the more streaming that takes place and the more ad revenue the company generates.

I like this play on streaming video, as it’s clear the cable-cutting trend is the one favored by consumers. While many find Roku stock as a high-growth name, keep in mind it is only recently hitting new all-time highs.

As a result, the stock isn’t as stretched as some of its growth peers and Roku’s next leg higher could provide strong returns to investors.

A more traditional play on the Internet of Things is Qualcomm. This company has its fingers in everything, but it’s a major player in the smartphone game.

When investors are talking about connected devices, it’s easy to think of drones and smart fridges. But let’s not overlook the most glaringly obvious component of all, which is smartphones. Whether it’s Android or iOS, it doesn’t matter. Qualcomm plays a role and as a result, it’s a very steady play on the IoT market.

It was in a nasty legal fight with Apple at one point. But last year — unexpectedly — the two resolved their issues overnight. Apple dropped its case, paid Qualcomm, and came to a multi-year agreement with the chipmaker.

While Apple will likely migrate to its own chips in the future, Qualcomm should still have a good run with the iPhone-maker.

It helps that Qualcomm pays out a respectable 2.2% dividend yield and has a reasonable forward valuation. While shares trade at 29 times this year’s estimates, Qualcomm trades at just 18.5 times 2021 expectations.

Like Qualcomm, Intel is another major chipmaker in the IoT space. It has shown its prowess in the past, such as when it does coordinated and synchronized drone shows with its products.

The company’s products are in everything from the data center, to Mac computers, drones and self-driving cars. However, many investors fail to realize that they’re also in a plethora of healthcare, banking, education and government applications as well.

Put simply, Intel has its hands in everything on the Internet of Things front. While it doesn’t boast the most robust growth overall, its IoT unit is rather formidable.

I like Intel for another area, too: edge computing and data center revenue.

As more IoT devices connect to the internet, the more data that is created. That is, more texts, more pictures and more information. As data grows, data centers grow. As IoT device usage grows, the more companies that will rely on edge computing.

Intel selling into those industries will help drive future growth for the company, particularly at a time when it really needs that growth.

Speaking of the creation of data, let’s not forget about Alteryx. The fast-growing software company is one to keep an eye as we progress into the future.

Admittedly, the stock is a bit on the expensive side. However, shares were hammered in August when the company reported disappointing guidance. Simply put, management issued conservative guidance given the uncertainty surrounding Covid-19. With the explosion in new IoT growth, those clients won’t stay on pause for long.

Case in point? Two months later the company came out and reissued third-quarter guidance. This time, the figure came in well ahead of the consensus estimates analysts were expecting when Alteryx reported earnings. That spending is back and it’s likely to accelerate.

I think the panic selling from last quarter makes this a great buying opportunity. It’s one of the few high-quality profitable, cash-flow positive growth companies out there that’s not at or near its highs.

Better yet, it has long-term secular growth in front of it. Using A.I., the company can help connect the dots where there is seemingly no correlation. It can improve efficiency and make sense of the unintelligible.

I could name every chipmaker under the sun when it comes to the Internet of Things stocks. However, I don’t want to do that. I want to focus on the best plays in the IoT space.

Fastly became a Wall Street darling this year, exploding from around $12 near its March lows to almost $120 near its summer highs. While the stock has swooned a bit since that run, it still has long-term opportunities. That’s particularly true if investors can nab this name on a deep discount.

The company is getting into the black this year amid strong revenue growth. What people don’t realize is the longevity in the growth, though.

This is not a couple quarters of accelerated growth or a strong year before fading back to reality. Edge computing is going to see more and more demand as the world continues its digital transformation. Covid-19 isn’t creating a temporary boost; it’s creating a permanent shift in the way we live.

As the edge sees more demand — ranging on everything from Uber (NYSE:UBER) to Amazon (NASDAQ:AMZN) — Fastly is going to be a beneficiary.

Getting to one of the more traditional Internet of Things stocks, Apple simply has to be on the list.

The company is one of the largest in the world. It has a cash hoard larger than many countries and is one of most well-known brands on Earth. One could say that the Apple Watch is what gives it the IoT touch. I would say it’s everything.

Every one of its devices connects to a tower, WiFi or both. That goes for iPhones, iPads, Macs and the Apple Home, TV and Watch. Earlier this year, Apple had more than 1.5 billion active devices in the world.

That’s a massive footprint on the IoT space — and it makes sense. I imagine a number of our readers are seeing this article on a Mac, and many users have two or three other Apple devices connected to the internet at a given time.

Don’t expect the company to slow down anytime soon, either. It’s introducing a slew of new products. While the coronavirus disrupted consumers and supply chains, Apple is forecast to get back on track in 2021. Estimates call for double-digit revenue growth and almost 20% earnings growth.

Also keep in mind, we don’t have to wait long for fiscal 2021, which just began after September. Apple stock has run hard and has now pulled back. Perhaps it will dip further, but bet against Apple at your own peril. This name is a long-term juggernaut. 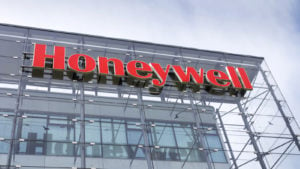 We’ve covered the chipmakers, streaming-video plays, data and edge-computing companies and now the real consumer IoT products. That includes names like Apple, Honeywell and many others.

However, Honeywell is one that investors tend to overlook when it comes to tech. That’s because it’s technically classified as an industrial stock — and it doesn’t get the credit it deserves.

While some may recognize Honeywell from their smart thermostat or home security, it’s actually a much bigger IoT play than that. The company has now launched the Industrial Internet of Things:

With the industrial IoT, Honeywell sees a juicy pie sitting in front of it and it’s not letting some other company eat it.

The stock kicks out a 2.2% dividend yield to sit through a slight decline in sales and revenue this year. However, it’s forecast to pump out double digit top- and bottom-line growth next year, while the stock is still ~7% below the 2020 highs. That still gives investors a chance to get in, particularly on a dip.

On the date of publication, Bret Kenwell held long positions in ROKU, AYX, AAPL and FSLY.

Bret Kenwell is the manager and author of Future Blue Chips and is on Twitter @BretKenwell.