Verizon Communications (NYSE:VZ) is proving to be a stable but undervalued company in the market today. In fact, VZ stock is worth at least 55% more than its price today using an analysis of its dividend yield, its own P/E ratio history, and a comparison with its peers.

The company reported “boring” earnings, according to Barron’s magazine for Q2 on July 24. But the magazine says “boring is good” in this market. They point out that the communications business is not a bad place to be in a pandemic.

For example, Verizon said that its earnings on a non-GAAP adjusted basis was $1.18 per share. This was only 3% lower than a year ago. On an adjusted EBITDA (earnings before interest, taxes, depreciation, and amortization) basis, its cash flow was down 5%.

But consider this. Verizon trades for a paltry 12.3 times this year’s expected earnings and just 12 times next year. Seven of its main competitors trade for almost 3 times that figure at 32 times earnings. This is one of the reasons I believe the stock is very undervalued.

A Healthy Dividend and VZ Stock

In addition, consider this. Verizon is likely to hike its dividend. 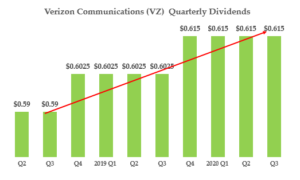 Verizon pays a quarterly 61.5 cents per share dividend or $2.60 on an annualized basis. This gives VZ stock, at $58.79 as of Aug. 14, a dividend yield of 4.18%. That is a very high dividend yield and provides a good return to investors while they wait for the stock to rise to its true value.

Moreover, the stock is likely to have a dividend hike. For example, look at the table on the right. You can see that after every four quarterly dividends, the company tends to raise the dividend.

Typically it is for about 2% to 2.1% per year. We have already had four quarterly dividends at 61.5 cents. Therefore it seems likely the board will declare a higher dividend, probably about 62.75 cents or maybe 63 cents per share.

This is usually declared during the first week of September around the 5th or 6th. It will be for shareholders of record typically on the 10th of October.

The net effect would be to raise the dividend yield to 4.27%. Look for this happen soon, and also to bring a boost to VZ stock.

But consider this. Verizon trades for a paltry 12.3 times this year’s expected earnings and just 12 times next year. Seven of its main competitors trade for almost 3 times that figure at 32 times earnings. This is one of the reasons I believe the stock is very undervalued.

I used three methods to measure the company’s value. 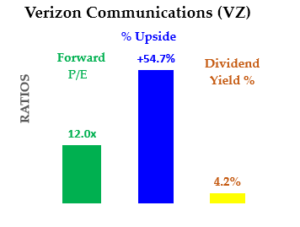 For example, based on its history, VZ stock has traded at an average price-to-earnings (P/E) ratio of 12.9 times over the past five years. Since analysts polled by Seeking Alpha estimate 2021 EPS of $4.91, that gives the stock a target value of $63.24 per share. This is 7.6% above today’s price.

In addition, a compilation of seven of its peers, suggests that VZ stock trades at a median P/E ratio of 32 times earnings. That gives Verizon a target price of $157.07, or 167% over today’s price.

Lastly, its historical dividend yield has been 4.68% over the past four years, according to Seeking Alpha. Since VZ has a 2020 dividend yield lower than at 4.18%, it is considered 10.6% overvalued.

Nevertheless, an average of all three of these methods brings in a stock price of $90.96 per share. That represents a potential gain of 54.7% over today’s price of $58.79.

Therefore, yes, Verizon is a boring company that generates huge amounts of higher free cash flow. But the stock is worth significantly more than its present price.

As of this writing, Mark Hake, CFA does not hold a position in any of the aforementioned securities. He runs the Total Yield Value Guide which you can review here.