Is It Finally Time to Buy Delta Stock?

Airline stocks are flirting with a possible rotation higher and that’s got investors taking a closer look at this group. Delta Air Lines (NYSE:DAL) is one of the better-run names in the industry, so we want a piece of DAL stock if there’s going to be a big run.

The question is, will there be a big run in airline stocks, or is this just a quick squeeze higher?

As a group, airline stocks began to break down in May, reversed, and then surged in June. Since then, they have been back under pressure. I have started to take a closer look at the group and have found several names compelling.

While a short-term surge like we saw in June would be nice to pad the old “P&L” line, I think there is a long-term opportunity here with this group.

Delta has gone to great lengths to make its passengers feel safe on its flights. That includes no middle seat, limited capacity, mandatory masks on the flight, deep cleaning, and high-rate air filtration, among other things. That said, customers are still not coming back in droves — to Delta or any other airline.

Coronavirus cases have remained elevated even though they are off the peak. The U.S. has averaged more than 1,000 deaths per day through the first 12 days of August. I’m not here to get political, just to hit the facts.

With tens of thousands of new cases per day and 1,000-plus deaths, that’s going to have an impact on the travel industry. We’ve seen that impact via TSA checkpoint numbers. 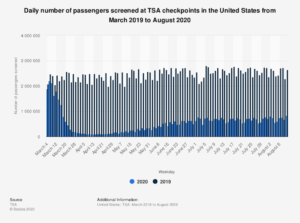 Traffic bounced back impressively from the April lows. However, it plateaued in July and while investors bid up airline stocks upon seeing the best post-coronavirus travel number from the TSA, that momentum is again beginning to wane.

Like a stock chart, that big travel number is potentially a leading indicator to a larger trend. However, it could also be a blip on the radar; a head fake. We’ll find out over the next few weeks and months.

One thing that is already certain is that we’re still down big year-over-year. Even though TSA screened more than 831,000 passengers on August 9, that is still just 31% of the traffic it screened on the same day a year ago.

Many airline management teams have said demand has leveled off and that it will be some time before we see a sustainable recovery in the airline space. With that all said, air travel isn’t going away in the future.

Despite the short-term pressures, the world will continue to strive for normalcy. Maybe that won’t be in the next quarter or even in the next year. But years down the road, we will return to our regular lives — and that will include air travel.

Delta finds itself somewhere in the middle. When Delta reported earnings, it was a doozy of a report, but that was expected by the Street. It has solid liquidity given the situation and is forecast to recoup roughly 65% of its 2019 revenue in 2021. It’s also forecast to be profitable next year.

Obviously these are just estimates and they are bound to change, but the trend is promising once we get through 2020. We know air travel will make it through to the other side and we know Delta will too. The in between is just a waiting game — albeit, with plenty of volatility.

A look at the chart shows DAL stock breaking over downtrend resistance earlier this month. However, the current dip has put the 20-day and 50-day moving averages in play as possible support.

Bret Kenwell is the manager and author of Future Blue Chips and is on Twitter @BretKenwell. As of this writing, Bret Kenwell did not hold a position in any of the aforementioned securities.