Nio Stock Isn’t the ‘Tesla of China’ After All

Editor’s note: This story has been updated from its original version to provide new analysis and expand on the context of the “NIO House.”

Nio (NYSE:NIO) stock enchanted U.S. investors this year. As investors have scrambled to find “the next Tesla (NASDAQ:TSLA),” shares in Nio have skyrocketed 415%. But there’s one problem: 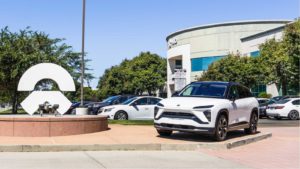 Instead, Nio (known as Wèilái in China) faces far stiffer competition than Tesla ever did. With at least 14 other electric vehicle manufacturers in China, it will take far more than wishful thinking for Nio shareholders to win.

Don’t get me wrong. I love the electric vehicle space.

It’s a business growing at 25% per year where winners will generate 1,000%-type returns for smart investors. And the Chinese automotive industry today looks much like America’s booming one of the 1950s when the number of U.S. registered cars doubled.

However, the booming U.S. auto industry also saw many losers. Between 1946 and 1960, the U.S. saw at least 27 major auto companies fold. The list includes famous names like AMC, to stranger ones like the Aurora, named by some auto historians as “the ugliest car ever.”

Carsalesbase, an industry tracker, counts no fewer than 91 Chinese car brands with more than 1,000 sales in 2019. As the No. 62 brand in China (that’s not a misprint), Nio is sandwiched by No. 61 Qorus and No. 63 Oushan Cos, brands barely known outside China.

But will Nio win? That depends on changing Chinese customer tastes, something far harder to predict.

The Chinese Auto Market: Ready for a Shakeout

History hasn’t been kind to auto manufacturers. Remember the golden era of U.S. auto manufacturing in the 1950s? By 2019, the number of U.S. brands had fallen to just eight. Including foreign ones, American consumers now buy only 34 different car brands.

Returns in the industry are also meager. No major car manufacturer has earned its cost of capital over the past decade.

Chinese auto manufacturers are facing the same fate. In 2019, 42 car brands saw sales declines of 20% or more in China. Even major players like Leopaard Motors and Huansu saw sales plummet 60% as customers shifted attention to other companies. (At its peak, Huansu sold almost 270,000 cars annually). That long list of 91 Chinese car brands will certainly dwindle over the next several years.

In other words, Chinese car buyers have a lot of choices and not all car brands will survive.

That’s the reason why, even in a great industry, I will only pick the companies with the highest chances of success.

Nio stock fans like to think of Wèilái as “the next Tesla.”

Tesla saw colossal demand: Analysts at the time estimated the company had a nine-month backlog. Demand was so extreme that websites popped up so Tesla buyers could ask each other where they were in line. Nio, however, struggled to fill its order books during the coronavirus pandemic, something Tesla hasn’t had trouble with.

Taken together, this suggests “Wèilái” fails to capture the Chinese consumer the same way that Tesla did in 2014.

Does Nio Have a Secret Sauce?

Nio doesn’t produce its own cars. Instead, the car company contracts with state-owned Jianghuai Automobile Group (JAC) for production. Terms, however, are particularly onerous. Not only must Nio pay per vehicle produced, but they also must compensate JAC for any operating losses that JAC itself generates.

Die-hard fans of Nio stock would twist this negative into a positive, calling the company a “lifestyle brand.” To them, it’s a benefit that the company doesn’t own its production facilities – why bother if you’re a pure-bred brand? Indeed, Nio also sells clothing, merchandise, and even offers the experience of its “Nio House,” which it bills as “a space for NIO’s users and friends.”

And success as a lifestyle brand would certainly bring riches to investors. LVMH (OTCMKTS:LVMUY), the company that owns Louis Vuitton, Hennessey, and other high-end brands, is worth $241 billion. Nio reaching that valuation means a 10x gain for investors.

But investors should remember that these are tall mountains to climb.

Secondly, success as a lifestyle brand will prove even more taxing. Hundreds of formerly shining brands, from Umbro and Ecko Unlimited, are now housed in penny stocks.

Can Nio Become the Next Tesla?

Certainly. Imagine a world where $52,000 “Wèilái” SUVs trundle down U.S. streets. One where American and European consumers eschew Teslas, BMWs and Audis in favor of a better, faster, cheaper, more desirable Chinese import.

Can you imagine that?

Because that’s what it would take for Nio to become the next Tesla: worldwide popularity.

Let’s turn to a 2-stage DCF model to see what’s at stake. To reach Tesla’s $400 billion market capitalization (i.e., become “the next Tesla”), Nio would have to increase sales to 3.42 trillion Yuan by 2029 while earning BMW’s 13% EBITDA margin.

To give Nio the benefit of the doubt, I’ll assume the company’s capital expenditure will decrease to 6.1%, depreciation charges decrease to a more manageable 3%, and de-minimis stock dilution. We’ll also assume its premium price tag remains at $52,000 per unit …

… That means Nio would have to sell around 9.71 million units annually. That’s 60% more than the top-3 makers, Volkswagen (OTCMKTS:VWAGY), Honda (NYSE:HMC) and Toyota (NYSE:TM), sold combined in China in 2019. The Chinese auto market is massive, but it’s still finite. As for becoming the next Tesla, Elon Musk & Co. do not sell 9.71 million cars either. And Tesla’s Model 3 is the second-most popular EV in China. The company is already worth as much as Ford Motor (NYSE:F), so TSLA needs global growth to push its stock up another 10x. So Nio’s fair value comes in higher because:

1) Tesla’s $400 million valuation also has some lofty expectations baked in.

2) Nio’s cash flows have to get discounted back an extra six years.

In other words, the only way for Nio to become the next Tesla (assuming they’re going to stay a car manufacturer) is to take a flyer from Tesla’s playbook and expand internationally. But suppose you have trouble imagining Nio shifting 500,000 “Wèilái” units worldwide every year. In that case, you’re better off finding another EV company like Workhorse (NASDAQ:WKHS), Nikola (NASDAQ:NKLA), or Li Auto that might.

Whether Nio stock rises or falls 10% today or tomorrow is a technician’s game (and one that I know how to play). But if you’re looking for 10x-100x returns in the Chinese electric vehicle market, then pause a moment.

On the date of publication, Tom Yeung did not have (either directly or indirectly) any positions in the securities mentioned in this article.

Tom Yeung, CFA, is a registered investment advisor on a mission to bring simplicity to the world of investing.