Novavax Looks Like a Winner With Its Vaccine Results

Novavax (NASDAQ:NVAX) published last week its positive Phase1/2 results for its novel coronavirus vaccine. The market loved the results and pushed NVAX stock up 20%. It looks like its valuation climb has more to go based on what analysts are saying about the company. 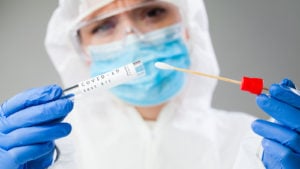 Keep in mind that the stock is up over 41 times this year and even 63% in the past month. It now has an $8.1 billion market capitalization. But analysts think it will fly even higher.

They like the results from the first part of its Phase 1/2 clinical trial of Novavax’s Covid-19 vaccine candidate NVX-CoV2373. The trial was deemed safe and every participant of the 131 adults developed antibodies. The results were later published in an online journal, medRvix, although not peer-reviewed.

Novavax is a favorite of most sell-side analysts, according to Seeking Alpha. For example, JPMorgan’s analyst Eric Joseph believes the company’s vaccine deserves a best-in-class vaccine moniker. He set a price target of $275 for the stock. This is over $150 higher than its price of $121.78 today.

Cantor Fitzgerald’s analyst Charles Duncan put a $211 price target on the stock. B. Riley FBR now has a $257 target price. The list goes on.

Ladenburg Thalman’s analyst, Michael Higgins, is the only analyst so far with a lower price target. According to Seeking Alpha, his concern is that other competitors are further along with their vaccine trials. They could get their doses out in the public faster if the FDA approves their drugs for mass vaccination before Novavax. He has a “sell” rating with a $105 price target.

Moreover, Barron’s said that despite its trials lagging behind others such as Moderna (NASDAQ:MRNA) and Pfizer (NYSE:PFE), Novavax has an advantage. Its vaccine method is “far more proven” than the technology used by these two peers. They use a messenger RNA vaccine method that has never had FDA approval before. But officials have approved this tried-and-true adjuvanted subunit vaccine methodology that Novavax is using.

Evercore ISI’s analyst Schimmer wrote that many administrators would be more willing to use Novavax’s vaccine, once approved.

After the results came out, Novavax reported both its earnings and also a new vaccine collaboration deal with Takeda Pharmaceutical (NYSE:TAK).

Essentially it’s a royalty deal for the vaccine. Novavax gets a portion of each vaccine price tag. It has no obligation to put up production manufacturing funding or file with regulators.

I suspect that Novavax with start doing this with many others. Takeda expects to make over 250 million doses per year.

Let’s try to model this out to see if the $8 billion market cap makes sense. For example, if it has 10 similar deals it could effectively earn 2.5 billion royalties. Assuming the royalty is 10% and the cost is $35 per dose, administered twice every other year, revenue would explode. That works out to $3.50 times 2 times 2.5 billion. That is $17.5 billion every two years.

I believe this steady stream of revenue, with virtually no cost, is worth at least 15 to 20 times revenue. Its patents are probably good for 15 to 20 years. That gives Novavax a market value of between $9.375 billion to $12.5 billion.

This is similar to what other analysts are saying about the value of NVAX stock. So patient buyers stand to make on average 35% on NVAX stock.

As of this writing, Mark Hake, CFA does not hold a position in any of the aforementioned securities. He runs the Total Yield Value Guide which you can review here.