Sell Grubhub Stock and Buy the Shares of Its Future Parent

Investors who are interested in buying Grubhub (NYSE:GRUB) stock should instead buy the shares of the company that last month agreed to buy Grubhub. That acquirer is Europe-based Just Eat Takeaway.com (OTC:TKYY). In the short-term and the medium-term, the outlook of the latter company’s stock is superior to that of Grubhub stock. 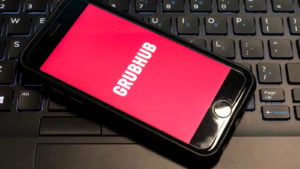 Under the merger deal that Grubhub made with Just Eat Takeaway, Grubhub’s shareholders will receive 0.671 of Just Eat Takeaway’s stock for each share of Grubhub that they own at the time that the deal closes.

Thus, long-term investors who sell their shares of Grubhub and buy Just Eat Takeaway’s shares will just be getting a jump on a switch that, in all likelihood, is going to happen within several months anyway.

But I think switching earlier will prove to be beneficial to investors for a couple of reasons. First of all, since the deal was announced on June 10, Grubhub stock has surged more than 20%. JustEat’s stock is up less than 15% since that time, and its shares have fallen about 5% since July 6. Given that dichotomy, I believe that Just Eat’s shares are likely to outperform Grubhub’s stock until the deal is closed.

Also making Just Eat likely to outperform Grubhub is the fact that, as others have pointed out, Grubhub’s shares, for psychological reasons, are unlikely to rise  much above $75. That was the value of the merger to the owners of Grubhub’s shareholders on the day the transaction was announced. There is no similar ceiling on Just Eat Takeaway’s stock.

Although Grubhub stock could theoretically climb tremendously if the company gets a competing takeover offer, I don’t expect that to happen. That’s partly because the most obvious candidate to make such a competing bid is Uber (NYSE:UBER), which already tried and failed to buy Grubhub for around $65 per share. More importantly, in my experience,  third parties rarely make competing bids once an M&A deal is agreed upon.

Why Grubhub’s Results Are Likely to Improve Following the Deal

I believe that, given its much larger size, Just Eat will be able to spend much more money on marketing than Grubhub has been able to afford. That higher marketing spending should help Grubhub regain a good chunk of the market share that it lost in the past three years.

Another factor that should improve Grubhub’s financial results is consolidation. Uber  is buying food deliverer Postmates, and a larger firm will probably look to acquire DoorDash, another top food-delivery service.  As the smaller companies that are desperate to gain market share at any price are absorbed into larger companies that are likely to be more focused on margins, the sector’s prices are likely to climb, enabling Grubhub’s financial results to improve.

Further, although I think that a majority of people with white-collar jobs will return to working in offices in early 2021, many tens of millions of them in the U.S. and Europe will continue working at home after the pandemic is over. Some of these people could get in the habit of ordering lunch as well as dinner from restaurants.

As a result, demand for food delivery is likely to be strong even after the pandemic is over. Anxious to capitalize on the trend, restaurants could start offering better financial terms to the top food delivery companies, including Grubhub and Just Eat.

Finally, within the next year or two, the proliferation of autonomous vehicles could make food delivery extremely lucrative.

The Bottom Line on Grubhub Stock

Since Just Eats stock looks like a better short-term bet than Grubhub,  I recommend that investors sell Grubhub and buy Just Eats.  Given Just Eat’s ability to improve Grubhub’s marketing efforts, along with the positive long-term outlook of the food delivery sector, Just Eat has a good chance to outperform the market over the next year or two.

As of this writing, Larry Ramer did not own any of the aforementioned stocks. Larry has conducted research and written articles on U.S. stocks for 13 years. He has been employed by The Fly and Israel’s largest business newspaper, Globes.  Among his highly successful, contrarian picks have been solar stocks, Roku,  and Snap. You can reach him on StockTwits at @larryramer. Larry began writing columns for InvestorPlace in 2015.