Let’s start with my definition of a momentum stock. They usually run fast and long and defy gravity. This group includes mega-caps like Shopify (NYSE:SHOP), Amazon (NASDAQ:AMZN), and Tesla (NASDAQ:TSLA). Sometimes investors overthink investments into this bunch. These are companies that are growing so fast that it makes their stocks also move in big bursts.

This presents a problem for most investors because on the way up they look like they’re always ready to crumble. Conversely, when they fall they seem headed to zero. SHOP stock is an extreme example of this, and those who try to short it in April after a big rally lost a lot of money. If you tried to catch an 8% drop on May 26, you caught an additional 10% points lower the next day.

On April 24 I wrote about embracing SHOP’s high valuation because that alone is not a reason to short it. It rallied over 35% since. The stock is still up 20% even after giving back some. The important part is where it sits now relative to its prior breakout levels.

Yesterday the S&P fell almost 6% and SHOP was only down 2.5%. This is a show of strength because it could have been much uglier.

SHOP Stock Has Short-Term Resistance Above and Support Below 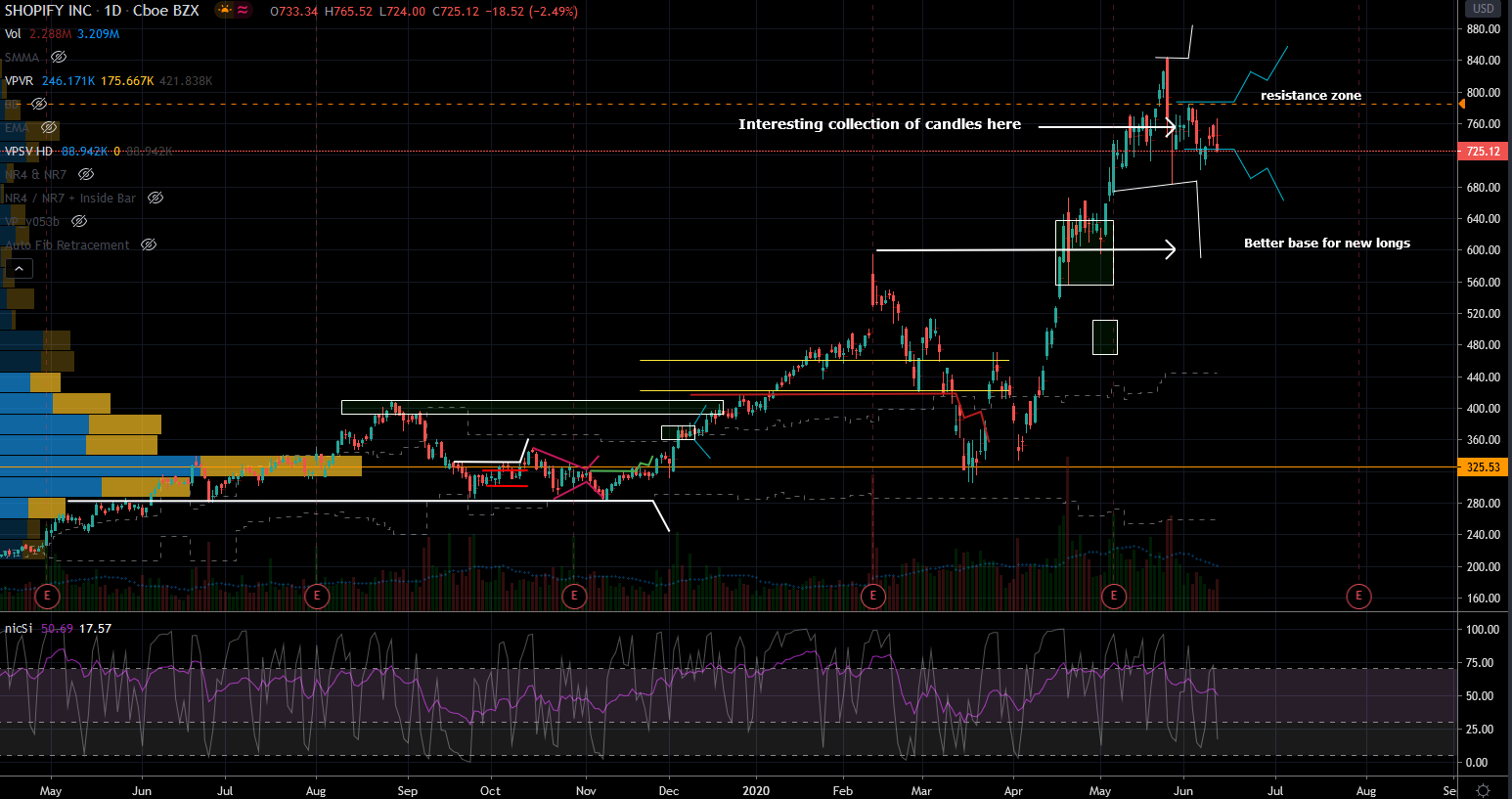 Let’s tackle the technicals first. Shopify has support into $680 per share. This served as a breakout for the last leg higher, so it only makes sense that on the way down they try to use it as support. But thereafter it becomes imperative to not lose said support because it would trigger a bearish run to $560 per share.

In essence, every neckline zone that served as a breakout on the way up will then become a support level on the way down. Onus is on the bears to prove that they can break through them.

To use typical metrics to gauge the fundamentals for it is wrong. The company still loses money and its stock price is 52 times its full-year sales. Clearly this makes no sense for conservative investors. But the right thing is to judge it as a growth opportunity, so the important metric is not value, but rather sales growth. Shopify delivers 50% year-over-year of that. I would not worry about the value as long as they can repeat performance.

Value Is in the Eye of the Beholder

Remember that Wall Street fought Amazon for a decade before they came to terms with the fact that aggressive spending is their source of continuous growth. Last year the experts avoided Amazon because of it being in ‘a spending year.’ I wrote about this as an upside opportunity because every time Amazon spends money they find new sources of money. This year’s all-time high stock price proved me right.

The same concept extends to Shopify. In fact, it is following in Amazon’s path, only it has an easier setup. The world already wants to be online and Shopify is here to benefit from it. The management team is strong and seems to have already earned the benefit of the doubt on Wall Street.

The CEO recently appeared very confident during his recent interview on CNBC. He remains engaged and in touch with individual clients who apparently all have his email address. Clearly this is an exceptional team and every serious dip in the stock is a buying opportunity.

Finding the right level to buy is always tricky with momentum stocks like this. There is also reason to worry because the markets are near all-time highs, especially the NASDAQ, plus the economic conditions are horrid. It is best to not rush into this high-flying stock without more clarity on the macroeconomic conditions for 2021.

If someone forces me to take a bullish position in SHOP stock, I would prefer to sell the SHOP November $400 puts and collect $15 for it. I don’t even need a rally to win. The stock can fall almost 45% from Thursday’s levels and I still would not lose money. My break even point would be closer to $385 per share.

The stock markets in general are too high even after the Thursday correction. That’s the only risk that stands in the way of more upside in Shopify stock. My caution is extrinsic inherent from the environment. Anyone taking full positions in risky stocks right now is potentially open to serious disappointment this year. There’s too much stimulus from governments to ascertain what will happen once this well dries up.

Nicolas Chahine is the managing director of SellSpreads.com. As of this writing, he did not hold a position in any of the aforementioned securities. Join his live chat room for free here.