2020 has seen investors chase some strange stocks, but Luckin Coffee (OTCMKTS:LKNCY) might be at the top of the list. Luckin disclosed one of the most brazen frauds in history, leading its stock to plunge. But since the disclosure, investors have piled in: Luckin stock now has nearly quadrupled from late June lows. 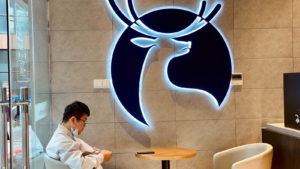 Broadly speaking, I can see how and why investors might see some value here. Senior employees committed fraud, which inflated revenue growth, but that doesn’t make the entire business a fraud. There are Luckin Coffee locations in China, of course. Thousands of them, in fact.

Meanwhile, Luckin still has a good deal of cash. The opportunity in China presumably still exists to at least some extent. Given that Luckin stock, pre-fraud, traded as high as $50, a price just above $5 might suggest that the market has overreacted.

I don’t believe that’s likely to be the case, however. The numbers at this point don’t look particularly impressive. Many unanswered questions remain about how the fraud was executed and by whom. Just as importantly, investors need to understand who’s left to run the business, and how they plan to take care of shareholders.

This is a case where investors need to look beyond the numbers. And once investors do that, the bull case for Luckin stock falls apart in a hurry.

Do the Numbers Work?

One of the problems with analyzing Luckin stock from a fundamental perspective is that we simply don’t have much data.

The last quarterly earnings release from Luckin was almost a full year ago. On Nov. 13, 2019, the company released third quarter 2019 results.

Of course, those numbers, by Luckin’s own admission were fraudulent. So it’s difficult to put much stock in them.

But we do have some information to work with. The problem for Luckin stock is that none of it seems good.

In terms of cash, as of June 30 of this year, Luckin reported that it had $780 million. That figure hasn’t been updated, but it still seems concerning. The company raised roughly $865 million in January. It’s not clear why the cash balance has shrunk, given that Luckin reported cash of $776 million at the end of last year’s third quarter, and hasn’t disclosed any outright theft.

Meanwhile, with $450 million in convertible debt outstanding, net cash is only $330 million or so. That hardly supports a market capitalization of $1.3 billion. In fact, it suggests that investors now are valuing the Luckin business, still, at nearly $1 billion.

Yet that business isn’t profitable. It doesn’t appear to be close. In last year’s third quarter, Luckin originally announced store-level operating profit of 186.3 million RMB, about $26 million. But after its investigation concluded, the company said that revenue in the quarter had been inflated by 700 million RMB, and costs by 520 million RMB.

In other words, as far as we know, Luckin didn’t even make a profit at the store level. It still had to fund 912 million RMB ($137 million) combined in sales and marketing, depreciation and general and administrative expenses.

So, as far as we know, investors are valuing a sharply unprofitable business at almost $1 billion. Even disregarding the fact that this company was executing a massive fraud less than 12 months ago (the inflated revenues were largest in last year’s fourth quarter), that seems potentially foolish.

But, again, investors need to look beyond those numbers. We have no evidence that Luckin’s business model is actually competitive, or that its plan to bring coffee to historically tea-drinking Chinese is working or will work.

We have no evidence that Luckin cares about its shareholders. The company didn’t fight its delisting from the Nasdaq. Investor communication has been minimal.

The story underpinning Luckin stock before the fraud was disclosed was admittedly intriguing. The company seemed to be growing quickly. (Incredibly, Luckin went from zero locations to over 4,500 in less than three years.) An “unmanned retail” strategy (to be funded by the January capital raises) promised better margins.

What’s the story now? Growth obviously was not what the company claimed, or close. (Almost half of originally reported fourth quarter revenue was fraudulent.) Even with many executives gone, it’s hard to trust Luckin given the lack of disclosure over the past few months, and the lack of interest in preserving what shareholder value remains.

On top of all that, Luckin stock isn’t even that cheap. And so it’s not just difficult to recommend Luckin stock — it’s impossible.

On the date of publication, neither Matt McCall nor the InvestorPlace Research Staff member primarily responsible for this article held (either directly or indirectly) any positions in the securities mentioned in the article.

Matthew McCall left Wall Street to actually help investors — by getting them into the world’s biggest, most revolutionary trends BEFORE anyone else. Click here to see what Matt has up his sleeve now. As of this writing, Matt did not hold a position in any of the aforementioned securities.

This article was originally published by Investorplace.com. Read the original article here.
Post Views: 469
Share
Facebook
Twitter
Pinterest
WhatsApp
Previous article
Nouriel Roubini: ‘The results of the election suggest that we are in a divided society’
Next article
Sony’s PlayStation 5 and Microsoft’s Xbox Series X Review: Do they live up to the hype?