The novel coronavirus and subsequent global economic slow-down have hurt the energy sector hard. Energy Transfer (NYSE:ET) has been among the hardest hit by weakness in energy prices over the past few months. ET stock is down more than 50% so far this year even though the firm has managed to claw back 30% of its value since mid-March. 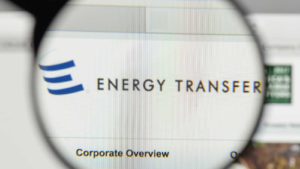 There’s certainly a case to be made for a long-term investment in the energy space right now, but it requires a strong stomach.

Weakness in energy prices isn’t going to last forever, and although we may not see things return to their previous highs, there are still some quality stocks worth buying now and holding onto for the long run.

But is ET one of those plays?

ET Stock Is a Dividend Stock

One of the most compelling reasons to buy ET stock is the firm’s juicy 19% dividend yield. There aren’t many stocks out there with such a huge yield— even in the energy sector where dividends tend to be a bit higher. But there’s a reason for that, especially right now as most firms are battening down the hatches to get through this economic downturn.

Can Energy Transfer keep paying out such a hefty dividend? Probably not.

Energy Transfer has found itself in a precarious position at the worst possible time. Aside from the challenging industry conditions, ET is caught up in a legal battle over its Dakota Access Pipeline. The firm has been ordered to shut the pipeline down at the start of August until an environmental review can be conducted.

Not only was Energy Transfer planning to expand the pipeline’s capacity, but it provides a much-needed income lifeline that’s going to be put on pause in August when it’s shut down. It gets worse. On top of that ET will have legal fees as it fights to keep the pipeline open and the firm may also have to contribute hundreds of millions in equity due to a backstop agreement with lenders.

In short, Energy Transfer is going to be strapped for cash this year. It’s tough to imagine a scenario in which its dividend payments aren’t at least trimmed at some point in the near future. If the firm goes ahead with planned expansions and keeps its dividend unchanged, its cash flow won’t cover expenses.

As Ian Bezek pointed out, the firm’s dividend payments exceeded its net income last year when the Dakota Access pipeline was running as usual. That’s a bad sign for ET this year.

“To give a sense of perspective, Energy Transfer paid out $3 billion in dividends last year,” he said. “That was more than the $2.8 billion that it earned in net income. Now income will drop as it loses cash flows from the Dakota Access for a time period.”

Is It Time to Sell ET?

But before you jump ship, it’s important to realize that ET stock isn’t all bad news. If Energy Transfer does decide to cut its dividend, even by half, you’re still looking at a dividend payment of roughly 10%. That’s still a relatively large payout, especially in today’s climate.

There’s also a chance that Energy Transfer’s Dakota Access legal battle will end well. That could offer a boost to ET stock and even save the dividend.

If the company is able to come out of this ordeal without many scars, it could make for an impressive turnaround story.

The Bottom Line on Energy Transfer

The case to buy ET stock is thin at best. Yes, even in a scenario in which the dividend is cut the company still offers a relatively high yield. But there are simply too many factors weighing on Energy Transfer’s finances right now.

Aside from the Dakota Access ordeal, the company could also face losses from its contract with Chesapeake Energy (OTCMKTS:CHKAQ) now that the company has filed for bankruptcy.

Most agree that Chesapeake won’t be the last energy company to go bust this year— that’s a risk for all pipeline operators, but especially those that are highly leveraged like ET.

All in all, ET stock is far too risky for the potential reward. The chances of the company getting through the next few months without cutting its dividend and selling off assets appear low, making it a poor choice for the majority of traders.

Laura Hoy has a finance degree from Duquesne University and has been writing about financial markets for the past eight years. Her work can be seen in a variety of publications including InvestorPlace, Benzinga, Yahoo Finance and CCN. As of this writing, she did not hold a position in any of the aforementioned securities.