Airline stocks flirted with a major breakdown in May, surged in June and are now teetering on another breakdown. United Airlines (NASDAQ:UAL) is not an exception to that observation. United Airlines stock surged 170% from the May low to the June high but has since tumbled almost 48%.

The stock is now hitting its lowest levels since early June, as it loses several key technical levels. The action has bears looking to press it lower for profit and bulls contemplating whether to cut and run. 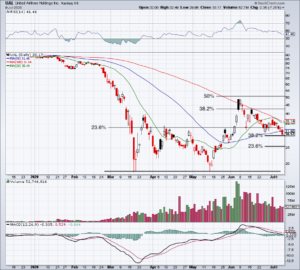 I love the way that UAL stock bobbed around after getting crushed in May and went on to retest the low a few months later. In hindsight — particularly the way shares hammered off the low — this was an incredible buying opportunity.

Anyone who bought near $18 likely made a killing, because this name almost saw $50 less than a month later. However, that’s where it ran into trouble.

Over the last few days though, United Airlines stock broke below the 23.6% retracement (for the entire prior range), as well as the 50-day moving average. These are not positive developments for the bulls.

Measuring from the May low to the June high, UAL stock is now coming into the 38.2% retracement. However, with so many other levels failing to buoy this name, I don’t know how much weight I’d put in this level holding. Below it and the 23.6% retracement for the more recent range is at $25.44.

Below $25 and this name is in trouble. On the upside, I really need to see this name clear the 20-day and 100-day moving averages. These have been the heavy resistance marks and clearing them could open up some upside in United Airlines stock.

The Problem With UAL Stock

The problem with United is very simple: flight traffic is down huge year-over-year. It will take years for the company to return to pre-coronavirus operations and in the meantime, it’s burning millions in cash each day.

When it comes to an investment pitch, this is not the one you want to hear. That’s particularly true when there are a number of companies that are doing quite well at the moment. Names like Netflix (NASDAQ:NFLX), Amazon (NASDAQ:AMZN) and Costco Wholesale (NASDAQ:COST). 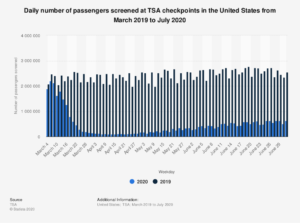 Have a look at the TSA traffic volume. While we’ve seen a recovery from the lows, traffic is still down considerably vs. last year.

In the most recent reading — which is right near the highest reading since Covid-19 hit the world — 626,500 people passed through TSA. That’s just under 25% of the people that went through TSA on the same day in the prior year.

One could argue that 25% capacity is pretty good, given that we’re only a few months out of the pandemic lows. At the same time though, it’s clear the situation in America is not progressing the way it is in other developed nations. Politicize it if you want, but facts are facts. Coronavirus cases in the U.S. are surging and that’s not going to be good for the economy.

It’s likely to make people think twice about flying in the near term. The longer the industry takes to recover this traffic, the more pain the airline businesses will be in. Even United just talked about a massive round of layoffs.

United Airlines stock traded at a paltry valuation before the coronavirus selloff, as did the entire industry. So why would it be worth a premium now? The short answer is that it isn’t, at least fundamentally speaking.

Bret Kenwell is the manager and author of Future Blue Chips and is on Twitter @BretKenwell. As of this writing, Bret Kenwell did not hold a position in any of the aforementioned securities.