Why CrowdStrike Investors Should Be Prepared

CrowdStrike Holdings, Inc. (Nasdaq: CRWD) has had an epic run this year and has more than tripled off its March novel coronavirus lows. That’s not necessarily unusual for a tech stock these days, and particularly not for one based in the cloud. But what’s next for CRWD stock, and does this cloud-based security darling still have further to run?

CRWD Stock: All About the Cloud

Long before Covid-19 turned the world upside down, the rise of cloud computing was one of the dominant themes of the past two decades. Amazon.com (NASDAQ: AMZN) essentially invented cloud computing as we know it today in 2006 via its AWS platform, and now it seems that virtually every major enterprise has moved at least part of their computing needs to cloud providers. The software-as-a-service model, in which users essentially rent web-based software as opposed to buying and installing software locally, is also part of this story.

It’s cheaper and ultimately safer to keep data saved on a server than it is on a local hard drive, but the cloud model does create some security risks of its own. Each endpoint – every desktop, laptop, smart phone or other device used to log in – is a potential entry point for a malicious attack from a hacker.

This is where CRWD stock comes in. CrowdStrike provides endpoint security, and it delivers it via the cloud. Its security software works behind the scenes, invisible to the end users, and the company claims its product reduces resource utilization by 25 times versus its competitors. In plain English, that means it won’t bog down your device.

CRWD stock is still a baby, as its IPO was just a little over a year ago. But its revenues are growing at a blistering rate. 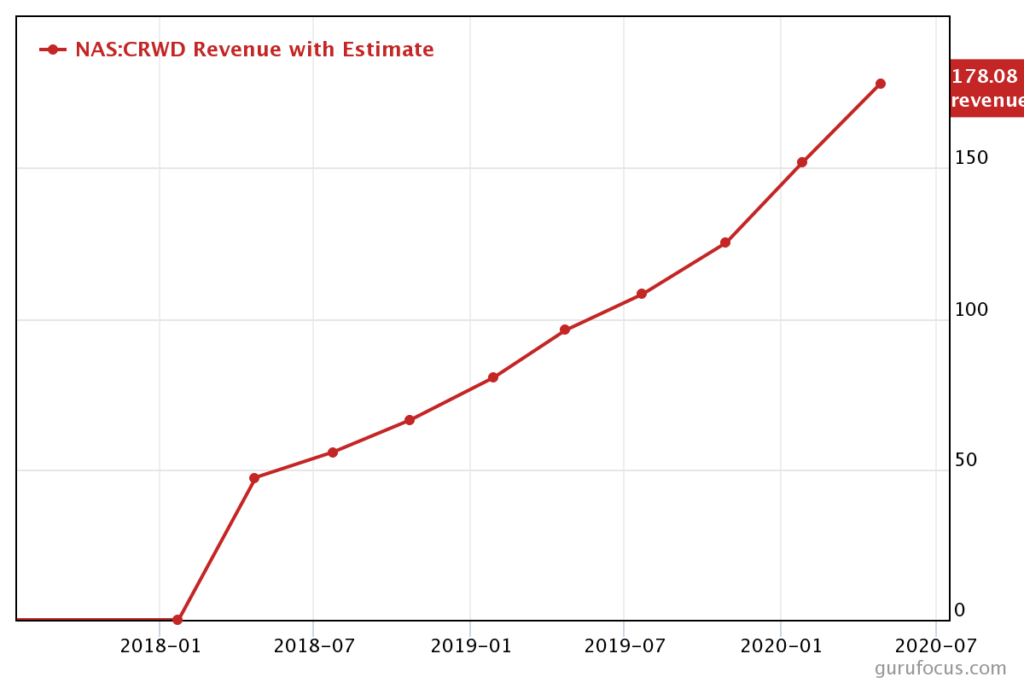 In early 2018, quarterly revenues were less than $50 million. Today, they’re closing in on $180 million and show no sign of slowing.

That’s the good news. The bad news is that the company isn’t profitable. It hasn’t had a single profitable quarter in its entire history as a company, or at least not on a GAAP basis.

The losses are getting smaller – just $0.09 last quarter – and it’s worth noting that the losses are mostly due to high marketing costs, which should presumably help to generate future growth. But as of today, the company has yet to actually make money.

And then there is the share price. CRWD stock trades for about 40 times sales. 40 times earnings would be a little on the expensive side. This is 40 times sales. That’s a really big bet on future growth that may or may not materialize.

Should You Buy CRWD Stock?

It pains me to say this because I’m a value investor at heart. But fundamentals really don’t matter today, and neither do valuations. Today’s market is driven by virtually infinite liquidity coming out of the Federal Reserve. All of the dollars the Fed is pumping into the financial system have to go somewhere, and many are finding their way into tech stocks.

I don’t know when the party ends. Frankly, I don’t know how it’s lasted this long in the face of a pandemic that doesn’t seem to be getting any better. But with no obvious end to Fed stimulus, the bubble might continue to inflate for a while.

Today, this market is favoring high-growth tech companies irrespective of earnings. CRWD stock certainly fits that bill, and I see no immediate catalyst to reverse its move.

So, by all means, buy CRWD stock. Trade it. Ride it higher. But don’t get married to it, and be prepared to sell when this growth regime shifts and value starts to matter again.